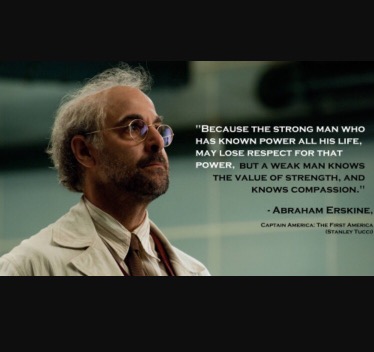 Steve Rogers: Can I ask you a question?

Steve Rogers: Why me?

Dr. Abraham Erskine: I suppose that is the only question that matters. [to Steve] So many people forget that the first country that the Nazi’s invaded was their own. You know, after the last war the…my people struggled. They…they felt weak. They felt small. And then Hitler comes along with the marching and the big show and the flags and the…and the… {red baseball caps}
[he waves his hand]

Dr. Abraham Erskine: And he…he hears of me, my work and he finds me. And he says, you…he says you will make us strong. Well, I am not interested. So he sends the head of Hydra, his research division. A brilliant scientist by the name of Johann Schmidt. Now, Schmidt is a member of the inner circle and he’s ambitious. He and Hitler share a passion for a cult power and Teutonic myth. Hitler uses his fantasies to inspire his followers. But for Schmidt it is not fantasy. For him, it is real. He has become convinced that there is a great power in the earth, left there by the Gods, waiting to be seized by a superior man. So when he hears about my formula and what it can do, he cannot resist.

Steve Rogers: Did it make him stronger?

Dr. Abraham Erskine: Yeah. But, there were other effects. The serum was not ready. But more important, the man. The serum amplifies everything that is inside. So, good becomes great. Bad becomes worse. This is why you were chosen. Because a strong man, who has known power all his life, will lose respect for that power. But a weak man knows the value of strength, and knows compassion.

Steve Rogers: Thanks. I think.

Dr. Abraham Erskine: Whatever happens tomorrow, you must promise me one thing. That you will stay who you are. Not a perfect soldier, but a good man.

There will always be those who are willing to follow, even grovel before, bullies, so long as they are within the bully’s protective orbit.

The relationship of opposites is symbiotic. A bully attracts the weak because a bully does not like to be challenged, and those weak will not challenge.

I once heard an anecdote, purportedly from 101 Arabian Nights. A slave master freed his slave, and asked his slave, “Now you are free, what is it you most desire with your freedom?” The slave responded, “A slave of my own.” Security, not freedom, was what the former-slave had learned to value.

If the Bully were deposed, those weak still would not stand for themselves. They would seek another bully, or a new Queen Bee to anoint and/or follow. 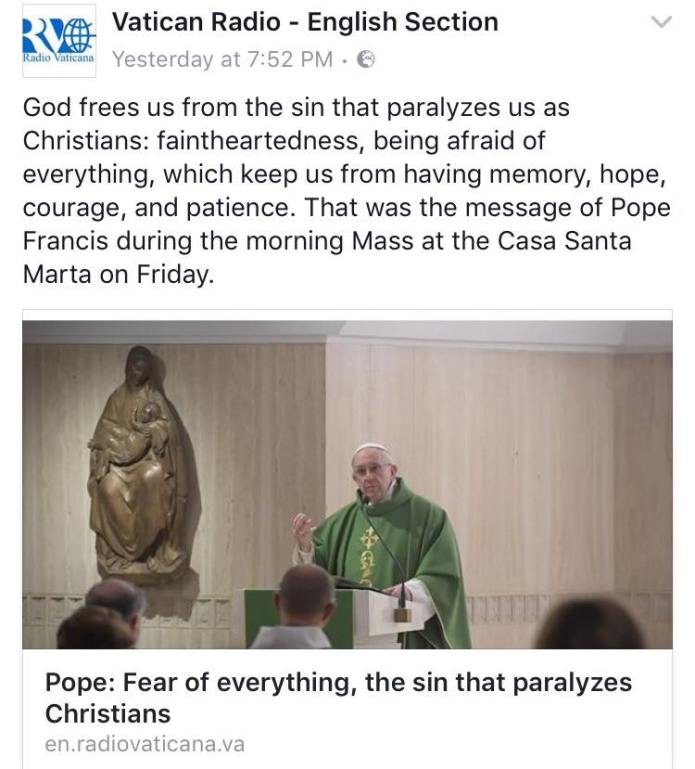 Historically, it has been that the vulnerable were most drawn to religion – Christianity, Islam, or other. Those who had reason to fear.
But when a once-vulnerable person finds security, he/she can choose one of two paths:

– Raise others out of their vulnerability, out of a sense of empathy and compassion, or

– Exclude others from rising out of vulnerability, out of a fear that “I just got in, and the raft is not big enough.”

Both the above began “weak,” in the sense of being vulnerable to external circumstances.

Only the latter is truly weak, in the sense of weakness of mind and character, fearful of losing one’s own sense of security.

“The unborn, the dying, the radically handicapped, the lepers, those afflicted with AIDS—all those who are shunned by the sleek and strong because they smell of neediness and death—live along the fault lines of society. Mother Teresa understood that a people is judged not by the successful whom we celebrate but by those along the fault lines for whom we care.

The message she embodied, and the message of the thousands of sisters all over the world who joined her in the Missionaries of Charity, is disturbingly countercultural.

It is disturbing because it demands a response not simply of admiration but of emulation.

Christians know better. Or at least we should.

2.  “Pope Francis: You can’t defend Christianity by being ‘against refugees and other religions’”,  Catholic News Service, 13 October 2016

Meeting a pilgrimage of Catholics and Lutherans from Germany, Pope Francis said he does not like “the contradiction of those who want to defend Christianity in the West, and, on the other hand, are against refugees and other religions.”

“This is not something I’ve read in books, but I see in the newspapers and on television every day,” Pope Francis said.

“It’s hypocrisy to call yourself a Christian and chase away a refugee or someone seeking help, someone who is hungry or thirsty, toss out someone who is in need of my help,” he said. “If I say I am Christian, but do these things, I’m a hypocrite.” 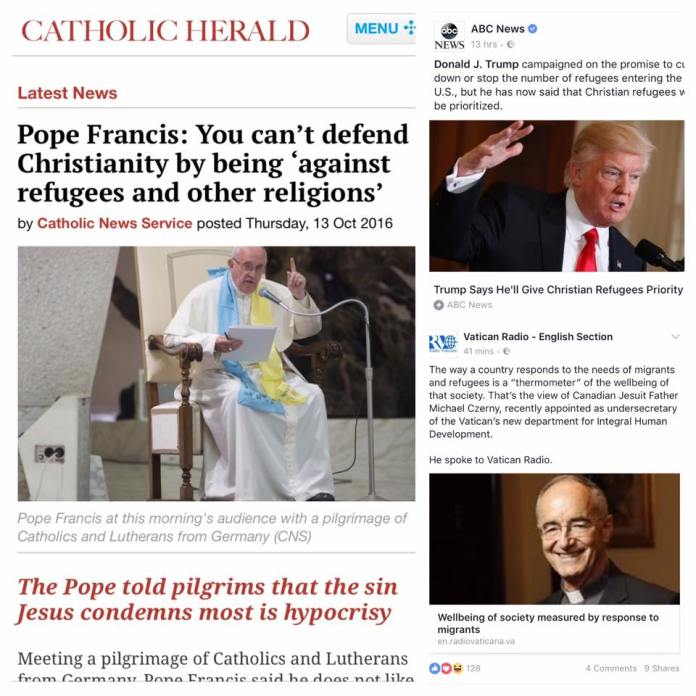 (Vatican Radio) The way a country responds to the needs of migrants and refugees is a “thermometer” of the wellbeing of that society. That’s the view of Canadian Jesuit Father Michael Czerny, recently appointed as undersecretary of the Vatican’s new department for Intergral Human Development.

“From where I’m standing it seems as though “Life” for you, comprises a very narrow demographic—one that bears a striking resemblance to you. The unborn are easy to advocate for because you can idealize them into something palatable to you, something benign and comfortable, something in your own image.

“I can tell by how often your heavy burden for the sanctity of life evaporates upon delivery. In so many cases this compassion really has a nine-month expiration date, as if life begins at conception but ends upon leaving the birth canal. The completion of that third trimester is actually the shelf life of your passionate regard for much of the living.

“Because if that life you say you so treasure, one day converts to Islam, you label it dangerous, you see it as a threat, you applaud suggestions of its expulsion, you deny it open worship.

“If that life eventually comes out as LGBTQ, you condemn its soul, harass it in your workplace and church, try to prevent its marriage, tell it where and when it can use a public bathroom. You bully it and drive it to suicide.

“If that life has brown skin and wears baggy pants and gets gunned down during a traffic stop, you not only have little grief over its loss, but readily blame it for its own execution.

“If that life doesn’t reside in the continental US or speak English and comes here fleeing oppression, poverty, and war you’ll never understand, you ask it to go back and “go through the proper channels”, instead of the barely sea-worthy makeshift raft or the stinking, stifling storage container it nearly died in trying to get here.

“I wish you were pro-life, my friend—I really do.

“I wish all human beings mattered as much to you as caucasian embryos do. I wish that once these diverse babies are thrust out into a violent, difficult, painful world; many enduring disadvantages, obstacles, and trials you will likely never experience—that you actually gave more of a damn about them.

“Because if you did, Life would be far bigger to you.

“You would want to do more than prevent abortions.

“As vigorously, passionately, and loudly…

On facebook status updates noting the tragedy of the Kansas abortion doctor’s slaying – the slaying of Tiller, reminded me of an email the day after 911, from my supervising attorney when i interned at the DC Public Defender:

“Yesterday was truly a black day. Along with all the terrorist tragedies, our client Jermaine Jackson died. He was shot early Saturday and they pulled the plugs yesterday. His stepdad thinks it was a robbery gone bad.I feel very bad for his family.”

Here’s my question to you, now – Is a tragedy less tragic because there isn’t a political spin to it?

It has been said that “a people is judged not by the successful whom we celebrate but by those along the fault lines for whom we care.”