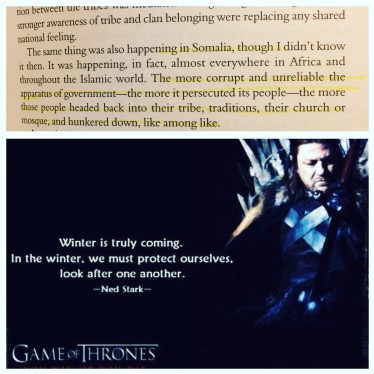 The biggest thing I observed in 2016: Loyalty and respect must first flow down from Power, before Power can demand that loyalty and respect flow up.
Otherwise it leaves an every-man (or clan)-for himself tribalism. Instead of #citizens, you are left with clansmen.
p87 – “citizens were no longer citizens… loyal to the nation …. The more government persecuted its own people the more those people headed back into their tribe, traditions, their church and hunkered down, like among like.”

About the spasms of violence yesterday … I’ve been thinking about this in the domestic context – why it is that in America extremists are sometimes praised for their ideological “purity”, but when it comes to Islam we condemn their extremists for their “fanaticism.” One reason might be the association with militancy. But the reason for the militancy, in the first place, is a perceived or actual lack of *peaceful options. In other words, the American political system permits free speech and protest from the most right-wing or liberal groups, whether neo-Nazi or Code Pink. That may not be the case in many secular but authoritarian governments which *happen to be predominantly Muslim countries, and in which the communities then and *only then (though not always) perceive their only option as militant resistance:
“… ‘#radicalization’ does not simply happen out there in society apart from the state; it is produced in a symbolic and material struggle with the state. Research conducted by many of the signatories of this letter demonstrates that theology and doctrine are largely irrelevant in explaining why mobilization takes place in the majority of instances. In other cases, the demonization of a religiously-identified group by a militantly secular government can create a conflict where there was not one before. When the #state declares its own #opposition to a religious group, its members are left with no choice but to either abandon their religious beliefs or find themselves in opposition to the state. However, in Central Asia, there has not been a direct correlation between state oppression of religious groups leading to people taking up arms in resistance. Repression does not automatically lead to #rebellion.
“The point is that the factors are specific and multiple, most of them are non-religious, and none of them are sufficient in and of themselves. They are not about a lack of modernization, and rarely much to do with theology, but about conflicts between #political #factions about #inclusion, #inequality, and political #economies perceived as unjust….”
President Trump announced that he would “eradicate” radical Islam from the face of the earth. But maybe there is also a *radicalization process, in the United States, that is a direct result of anxiety that his very Presidency – (1) through his persistent attacks on those who disagree with him (ordinary citizens and institutions alike) threaten America’s democratic traditions allowing open forums for dissent, and (2) through his refusal to release his taxes, divest himself from his businesses, and his hiring of his son-in-law as a close advisor, that he will be a president not for all Americans but his own faction and family.
“When the *state declares its own opposition to a [] group, its members are left with no choice but to either abandon their [] beliefs or find themselves in opposition to the state.”
http://thediplomat.com/2017/01/understanding-islamic-radicalization-in-central-asia/?