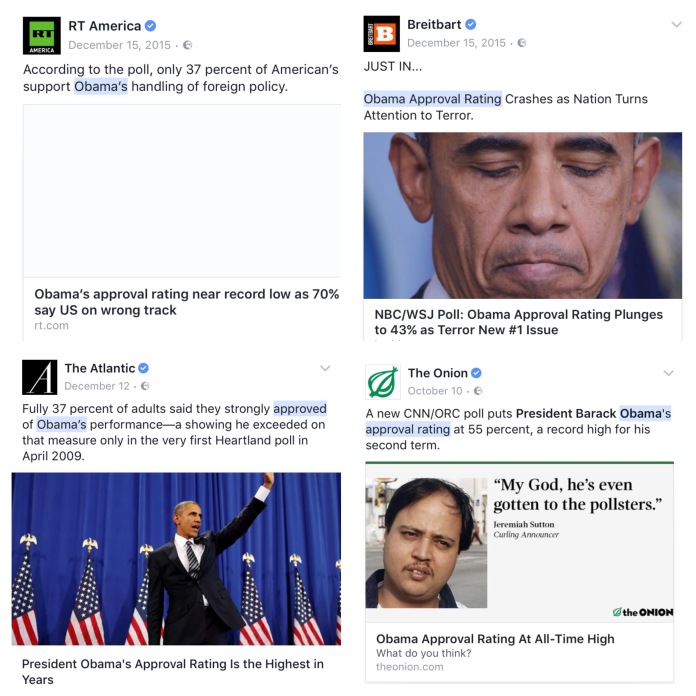 JUST IN… Russia Today and Breitbart coordinated news reporting. (Joke)
looking around on FB to see how people’s perceptions can be shaped by where they get their info, via the filters the sources themselves apply.
i noticed, for example, a cluster of reporting on “obama approval rating” by certain sources on December 15, 2015, in contrast to more widespread reporting on the same in the June-July and October-December 2016 timeframes.

Then there was The Atlantic and the mainstream media reporting on “high” approval ratings scattered in the summer time, then again in the final months of the Obama presidency.

Any person who relies on a single set of sources *exclusively might conclude one of several things:

(b) The sources reporting on different information are “#biased” (eg, that “mainstream” sources only report when Obama has high ratings, rather than that ratings of incumbents leaving office are of historical interest)

(c) THE ONION is the *best* source because it explains the discrepancy. (#FakeNews)

1.  See, Jill Dougherty, “How the Media Became One of Putin’s Most Powerful Weapons: After decades of wielding Soviet-style hard power, Russia is developing a subtler form of influence”, THE ATLANTIC, April 21, 2015 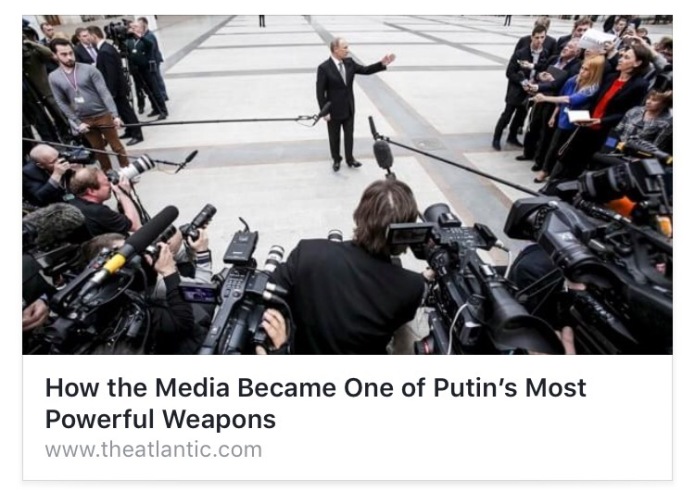 Vladimir Putin is a news junkie.

The Russian president’s press secretary, Dmitry Peskov, didn’t use that expression when we talked by phone, but that’s what he described to me: a man at the center of an ever-churning machine processing vast amounts of news and data at his command.

“Sometimes we’re wondering what is the limit for a human being for absorbing this huge amount of information,” Peskov told me, “but, well, it’s really a very, very, very heavy job.”

Peskov, speaking fluent English, described the operation. “First of all, the information and press department of the presidential administration prepares digests on print media, on Internet sources, on domestic media—federal and regional.

“We have special people working around the clock, preparing TV digests. We’re recording TV news on the [Russian] federal channels for him during the day. Obviously, it’s very hard for him to watch news so we make digests, let’s say, zip versions of TV news, divided into issues.”

“It’s quite convenient when he’s going home, let’s say, from [the] Kremlin, when he is not spending a night here … he can use this 20 minutes for really understanding what happened during the day in terms of information.” He watches TV news channels in English and German—a language he speaks fluently thanks to his posting in Dresden as a KGB agent in the late 1980s—and receives English- and German-language newspapers.

“Frankly speaking, I wouldn’t say that [Putin] is a fluent user of [the] Internet,” Peskov added, “but he is fluent enough to use some resources, plus, definitely, he is comparing what he sees and hears from [the] press … with the news he’s receiving—when it comes to foreign affairs—from his foreign ministry, from his special services, from intelligence, from various ministries, and so on.”

As a former KGB officer and head of the KGB’s successor agency, the FSB, Putin knows the value of information.

His concept of the media, however, is a far cry from the First Amendment. For him, it’s a simple transactional equation: Whoever owns the media controls what it says.

Putin positions himself as a renegade abroad, deploying the hyper-modern, reflexively contrarian RT—an international news agency formerly known as Russia Today—to shatter the West’s [liberal media] monopoly on “truth.” The Kremlin [Bbt] appears to be betting that information is the premier weapon of the 21st century, and that it can wield that weapon more effectively than its rivals.”

2.  But, see, Alex Isensradt, “Trump vexed by challenges, scale of government: The new president’s allies say he has been surprised that government can’t be run like his business”, POLITICO,  02/10/17

“Trump, a voracious consumer of cable news…”
(That’s like saying someone gorges on cheetos)
http://politi.co/2kabPlg
3.  Cf.

President Barack Obama does not watch cable news. This was the take away from an interview with former White House Press Secretary Jay Carney on CNN’s “Reliable Sources” this Sunday.
When asked by host Brian Stelter about the president’s news diet, Carney listed The New York Times, The Washington Post, The Wall Street Journal and Politico, describing Obama as a “voracious consumer of the printed word.” But when it comes to CNN, MSNBC and, especially, FOX News, the president respectfully declines.
“I don’t think it would be accurate to say by not watching cable news, he’s not aware of what the political fight of the day is,” said Carney. “But he does maintain, I think, a healthy distance from it.”
Carney added that governing by the whims of the media might not be the most effective way for the White House to operate.
“I think that it’s hard to find the sort of perfect balance because you don’t want, and I don’t think any of us should want as citizens, a White House that governs by cable news or governs by Twitter,” he said. “I think that would be very counterproductive.”