Facebook purchasing #WhatsApp years ago for globs of money was met with a lot of skepticism. So was their failed effort to buy Waze. Critics said they paid too much, WhatsApp wasnt worth that $22b. (http://www.forbes.com/sites/parmyolson/2014/10/06/facebook-closes-19-billion-whatsapp-deal/) But I suspect that Facebook wasn’t viewing at the acquisition in one dimension. They were possibly thinking, if a competitor acquired WhatsApp, what would it be worth to them.

Its the same way with #fantasyfootball: Lets say you are ok at Tight End (TE), and there is another decent TE on waivers. Lets say for you, using a waiver spot on that TE would net you +1. No big deal.
But lets say your buddy’s team is weak at TE. Getting that waiver TE would be a +5 for him.

So, net result of letting *him get the TE is effectively a -5 for you, in a head-to-head matchup. Viewing the value of that TE, within the confines of your own roster (+1), you’d undervalue him. Your team doesn’t exist in a vacuum.

I.e. if it were a business acquisition, the value of that TE isn’t necessarily what something is worth to your team or your company, than it should be its value in the context of its potentially shaping the competitiveness of the entire ecosystem.
And this is true for everything else in the non-linear world, to include #politics, foreign relations, etc. 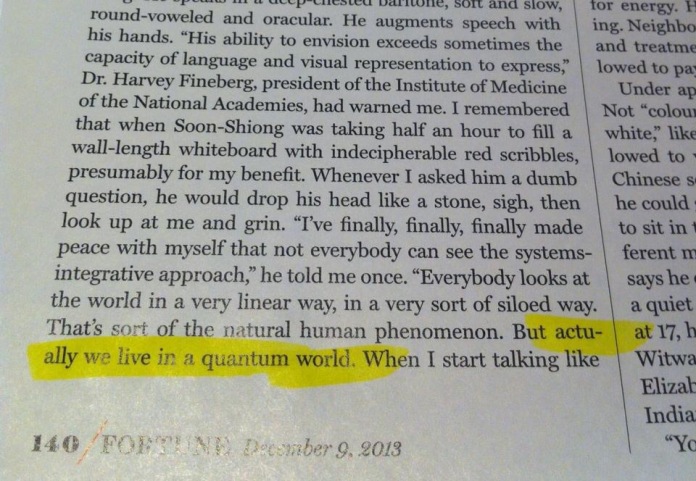 When people were blasting Mitt Romney as potential Secretary of State, were they not looking at the potential alternatives, the likes if noun-plus-verb-plus-911=sentence Rudy Giuliani or John Bolton?
“We look at the world in a very silo’ed way”

I wonder on and off about why we are hypersensitive to terrorism but not larger strategic threats. What Michael Hayden described as “the urgent” versus “the important”, terrorism versus managing our relations with strategic competitors/adversaries like Russia/China/N Korea/Iran.

So, 90% of our attention goes to preventing paper cuts that when inflicted, sting and can be vivid; and 10% to malignant tumors, which lurk unseen but can be far more deadly.

China steals an underwater drone. Oh well, just a piece of technology the average voter doesn’t understand anyway. Russia hacks us, oh well, who knows (though with the USG getting warrants to read a dead killers’ iphone – HOW DARE YOU even *apply for judicial authorization) Hell, global warming? (If true, we all die – not just Americans. But even before that, we’ll have to first lived through intensified conflicts from resource scarcity etc)

If its not easy to make a tangible connection to our immediate lives, its just discounted.

The results this kind of no-depth-perception thinking leads to, would be comical if they weren’t also potentially serious, at least in the long run.
Not color-blind but depth-deprived.
#OnTheRoad