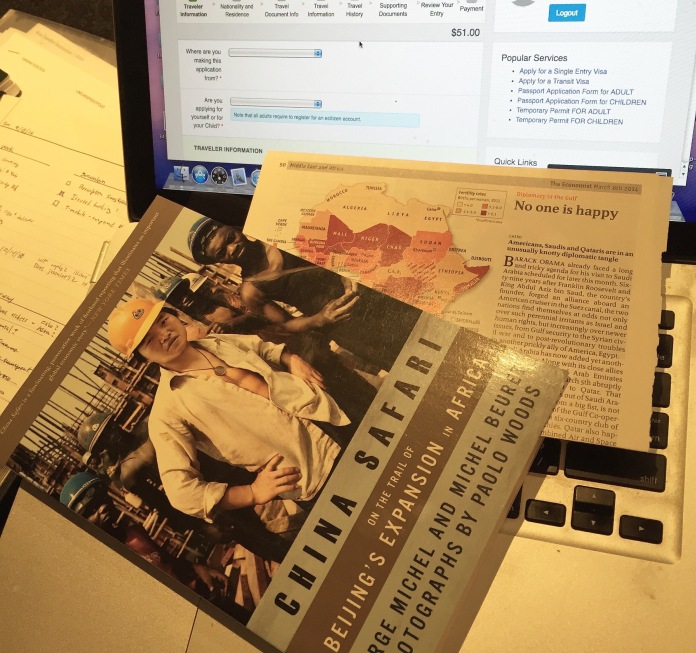 I’m in Morocco last November, and as I approach the terminal after getting off a prop plane, I see a greeting delegation holding a sign for a Sino-Africa Joint Investment conference with an arrow pointing a “VIP” area.
Later as I clear customs the immigration officers stops me – after already inspecting and stamping my passport, and me halfway past him into the baggage claim area. He wants to know, “where are you from?”
Well, he just inspected my US passport, so I figure he means New York city? “No, where are you from?” he repeats.
Oh, I get it. So I try, “My parents are from Taiwan.”
Confused look. Maybe he is thinking “Thailand?”
“I am Chinese,” I surrender.
The immigration officer gives me a look of recognition – a “I knew that” look – breaks out a large smile, and sends me the one step through with a cheery “welcome!”
I decide right then, that in case of any unrest in northern Africa, and if I have to make my way to an American embassy, I will be Chinese until I get through a Post One and by a US Marine.
China is aggressively investing and expanding its presence in Africa. And you can bet that internationalism is part of a China First foreign policy.
“Foreign aid” isn’t based on state-sponsored altruism. It’s purpose is to secure influence over parties to a post-War global order, largely shaped by the United States (that China wants to challenge/US wants to maintain) that promotes American interests, but sure as hell sounds more warm and fuzzy than naked colonialism.
Once America chooses to become “America First” (ver. Trump), others will step in. Want to secure beautiful trade deals that benefit American companies seeking international opportunities? Get in line.
https://www.washingtonpost.com/world/national-security/75-retired-senior-diplomats-sign-letter-opposing-trump-for-president/2016/09/21/5c5dff10-8046-11e6-b002-307601806392_story.html
The Trump campaign responded on Thursday that the country needs “an America First foreign policy.”
“How terribly weak and ineffective for a bunch of career overseas bureaucrats to send a letter or cable saying they want to keep things exactly as they are now and that they’re rallying around fellow insider Hillary Clinton,” the statement said. “The world has become a more dangerous place on their watch and they need to step up and own it.”